Overcoming the unexpected with help from her wound care "family" 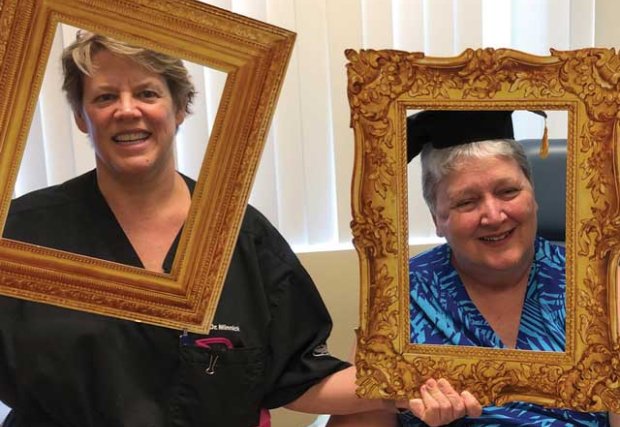 It was a simple MRI to determine the cause of pain in Cindy Johnson’s left shoulder. No big deal; this was not Johnson’s first experience with an MRI or healthcare services. As a two-time breast cancer survivor and an amputee of her right hand, she has become a bit of an expert when it comes to healthcare. Zip in, zip out — find the source of the pain and quickly start treatment.

As part of the preparation for her eventual hand prosthetic, Johnson was wearing a mesh compression sleeve on her right arm when she went for her MRI. However, not long after the test started at a local radiology center, she noticed something was not quite right.

“A few minutes into the MRI, I felt pain in my right arm and thought, ‘I should not be having pain’ but decided to endure it since it was only going to be for a few minutes,” Johnson recalls. “But when the MRI was completed, it was obvious something was not right.” It turns out that the compression sleeve had silver threads woven in the fabric and those reacted with the MRI, resulting in burns to her arm, which were significant enough that she would need wound care therapy.

This is the point where she considers herself a little “lucky” to have previously had breast cancer. She had met Kathleen Minnick, MD, who served as the medical advisor for her breast cancer support group and is the co-medical director of the Center for Wound Care and Hyperbaric Medicine at Wellington Regional Medical Center. For the second time since making that connection, she turned to Dr. Minnick and her skilled wound care team for specialized treatment.

Her first wound care experience, and what brought her back

Just months earlier, Johnson had suffered serious injuries after she was found unconscious and facedown at her home. In addition to multiple pressure ulcers, her right hand had been under her body for an extended period of time, and the damage was so severe that her hand had to be amputated. Because of her relationship with Dr. Minnick, she chose to have wound therapy treatment at Wellington Regional. So, when facing wound care again after the MRI burn, she decided to return to the team she knew and trusted.

“I chose to come back to the Center for Wound Care and Hyperbaric Medicine at Wellington Regional Medical Center because of the success of my first wound care experience,” says Johnson. “It is such a friendly place. Everybody there knows me and treats me like family.”

During her weekly visits, her medical team debrided her wound using specialized medicines to remove dead tissue; and when the wound was clean, they applied growth factor to speed up healing. While this was happening, the prosthetic representative visited Johnson at the center to begin fitting her for her new prosthetic.

After Johnson completed her treatments, the center had a “graduation ceremony” for her. She is grateful for the supportive care she received, not just once but twice. “I am very appreciative of what they have done for me,” she says.

If you are suffering with a chronic wound due to diabetes, poor circulation or another condition, the Center for Wound Care and Hyperbaric Medicine at Wellington Regional offers highly personalized, award-winning care to promote healing. Advanced treatments provided include negative pressure wound therapy, total contact casting, bio-engineered tissues, biosynthetic dressings and growth factor therapies. The center also offers hyperbaric oxygen therapy, which works by surrounding the patient with 100 percent oxygen to help the healing process.