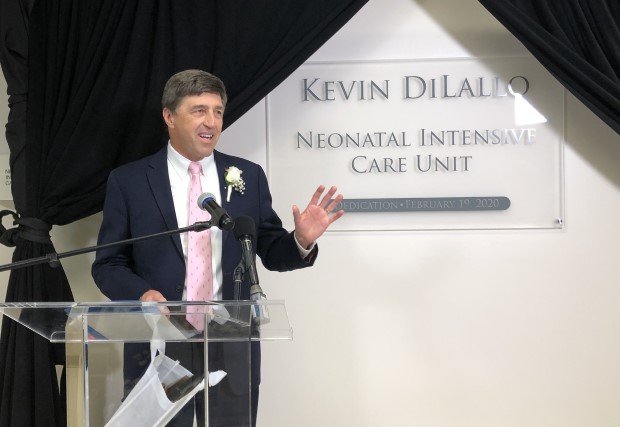 In 2009, Kevin DiLallo, then Chief Executive Officer (CEO) of Wellington Regional Medical Center (WRMC), stood in the big, empty space that was the hospital’s new level III neonatal intensive care unit (NICU) and wondered how the hospital was ever going to get enough patients to fill the space. Today, the same NICU—which has cared for thousands of newborns and is still the only level III NICU in the western communities—is being named in his honor.

"We have been looking for a way to recognize Kevin’s impact on the hospital because he was involved with so many great things at Wellington Regional when he was CEO,” said Pam Tahan, CEO of WRMC. "But the development of the level III NICU was vital to the future of the hospital and it seems fitting to name the unit after him.”

"I look back on the development of the NICU and its eventual expansion with great pride," said DiLallo. "The physicians, hospital staff, nursing and community all got together to help create the NICU because they all knew it was important for the community. It involved a lot of great teamwork to make it happen."

In 2000, a four-bed level II NICU was opened within the labor and delivery unit, which was located on the first floor in the current hospital’s interventional services unit. The first NICU eventually outgrew the space and had to be relocated to the front tower. At first the new unit was 10 NICU beds. Then in 2009, the Agency for Healthcare Administration approved WRMC to include an additional 15 level III beds, and the unit was again relocated to the current location. The rise from no NICU in 2000 to a thriving level III unit by 2009 was rapid but also showed the overwhelming need to provide care to the sickest of patients in the community.

Learn more about the NICU at Wellington Regional >

"Kevin has been a tremendous leader for more than two decades with Universal Health Services," said Alan B. Miller, Chairman of the Board and CEO of Universal Health Services. "His contributions, not only to the NICU, but the expansion of the ER, the construction of new buildings and service line growth helped Wellington Regional start the path it remains on today."

DiLallo was at WRMC from 1998 to 2010, but left when he was named the Group Vice President for Manatee Healthcare System. While at the hospital, DiLallo served as Chief Operating Officer from 1998 to 2000 and then CEO until he left.

Today, the NICU is 15,000 square feet, provides highly advanced technology in a comfortable environment and is capable of caring for some of the highest risk pregnancies, as well as the sickest and tiniest of babies. The NICU currently treats about 300 patients per year.

DiLallo joined Universal Health Services in February 1998 and is currently responsible for overseeing operations for the Manatee Healthcare System, which includes Manatee Memorial Hospital and Lakewood Ranch Medical Center. Kevin provides leadership to over 2,000 employees and 700 physicians in a multi-system, integrated network. He resides in Bradenton, Florida, with his wife Jo-Ann.