Patient Reunited with Stroke Team that Saved Her Life 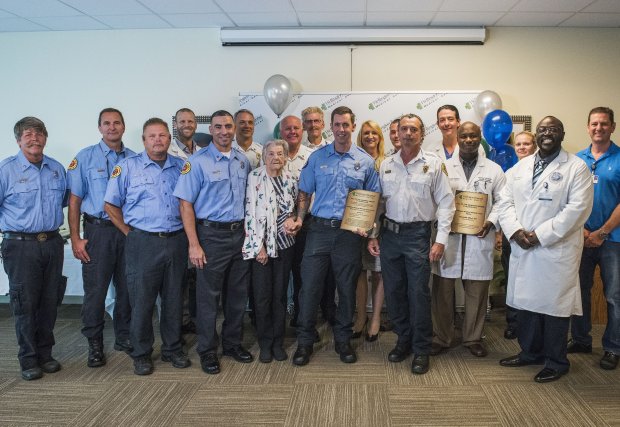 Thelma Bibbo (center) is reunited with members of Palm Beach County Fire Rescue and the staff at WRMC that helped save her life.

On May 21, 2018, John Bibbo, the patient’s son, called 9-1-1 to report that his mother had experienced a decrease in blood pressure and fainting spells while eating at a restaurant. PBCFR responded to the then 90-year-old Thelma and alerted WRMC of a “stroke alert,” meaning they were bringing a potential stroke patient to the emergency room. This collaboration helped Thelma receive the most efficient, quality care and resulted in her full recovery.

“The purpose of bringing everyone together today is to celebrate the teamwork that results in lives being saved,” said Robbin Lee, CEO of WRMC. “We are thrilled to honor  Fire Rescue crew 20 and the physicians that allowed us to be here today, celebrating Thelma and her 91st birthday.”

In attendance were the physicians who directed Thelma’s care, Emergency Department physician Jeremy O’Shea, DO, and Internal Medicine physician Romuald Altine, DO, as well as Neurointerventional Radiologist Juan Gomez, MD, who performed the life-saving procedure that removed the clot from Thelma’s brain. In addition, PBCFR administration, WRMC physicians and nurses, and hospital leadership joined the celebration.

Get monthly updates with health news, recipes, and more